The landscape, word for word

The philosopher Daniel Bougnoux thus comments on this disturbing experience of an exhibition where the images are present only in our own mental imagination: “To exhibit only words in a museum, and on this scale, what a challenge! This game of interlockings, and referrals, tells us something about our ways of apprehending and handling the vast world around us. Words will never give us the equivalent of the thing seen, the legible does not equal the visible; and no painting, circumscribed within its frame, will cover the bouquet of visual, auditory, tactile, olfactory sensations…, tied together by a landscape. The (semiotic) map is not the territory. But the characteristic of art, or even of a word, is not to represent a world, but to suggest it, to reduce it to a sketch capable of setting a chain of thoughts or sensations on fire. The slow wick of words sets our mental images ablaze…” 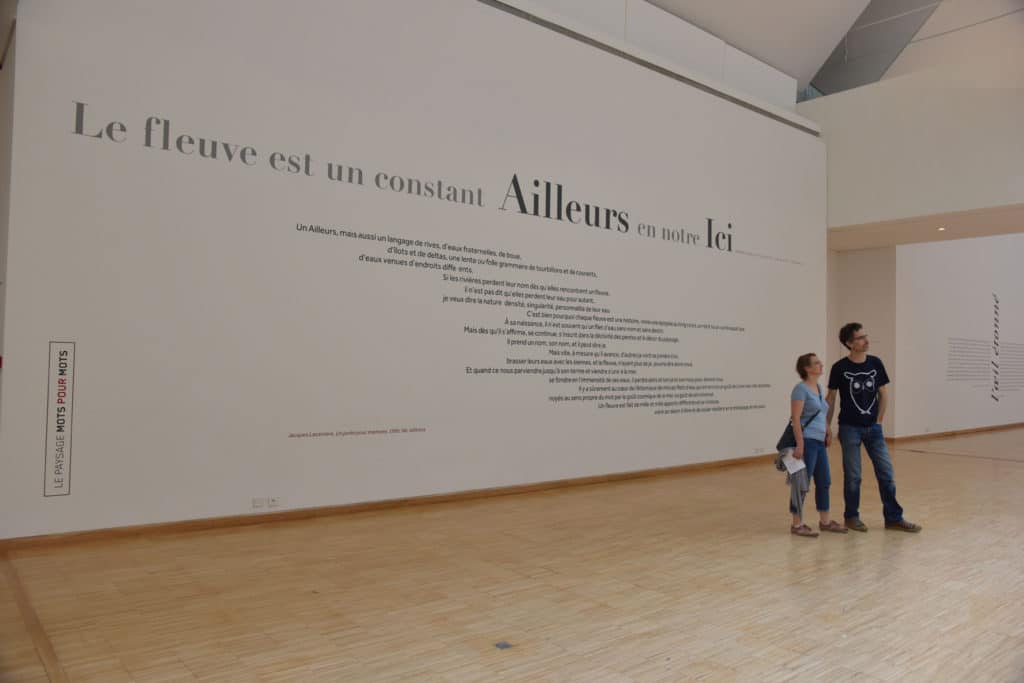 On each of the eight walls of the central aisle of the Grenoble Museum are printed pairs of texts:

The second text is a rebound written today by this author and which argues his choice: Why from my mental library retain this fragment: power of a description, arrogance of a proposition, radical questioning of our certainties about the countryside ? And the luxuriance of the sensibilities of the authors chosen refines our understanding of what makes a landscape emerge and impose itself on us: Jean Giono, Stendhal, Aragon, Héraclitus, Balzac, Aimé Césaire, Mario Rigoni Stern, Oscar Wilde (who prophesied in “The Decay of Lying”: “At present, people see fogs, not because there are fogs, but because poets and painters have taught them the mysterious loveliness of such effects. There may have been fogs for centuries in London. I dare say there were. But no one saw them, and so we do not know anything about them. They did not exist till Art had invented them »