The Season 02  paysage>paysages program is designed with sustained attention to the entanglement of movements that punctuate the landscape and stretch the course of the world. It is called “landscape in motion” because the fixed, stable, fixed landscapes do not exist. The sedentary and the definitive are only illusions of optics or perception. Everything in the landscape moves, pitch, boat, jostles, migrates and moves ….

Landscapes are traversed by vast imperceptible movements – star drifting, melting glaciers or silent migration of plants and forests continually testing the soils, prevailing winds and exposures. Landscapes are also witnesses to the migrations and transhumance that characterize the entire animal kingdom, swallow eel, a great drive that moves the living on the surface of the globe without compasses or onboard geolocation system. Each of these travelers takes away seed-drenched droppings, exogenous bacteria and renewed chants that reshape ecosystems and our imaginations. The dynamics of the landscape are still made of unexpected accelerations: avalanche, thunder or storm. The landscape then resumes its full place, a brutal savagery that overflows us and imposes itself beyond the time of the human species.

But landscapes are mostly reconfigured by human activities and circulations. Our daily experience of the landscape rarely consists of watching him sit on a bench, but more frequently to cross him distractedly sitting at 130 km / h. Also, contrary to the route too well drawn of the main road projecting us as soon as possible to a specific destination, this season 02 landscape> landscape offers you to walk available at random and the unexpected, attentive to all meetings, to enjoy the passing of time, the changing weather, to forget the certainties or worries to leave the escape to the point.

Here are the first highlights: 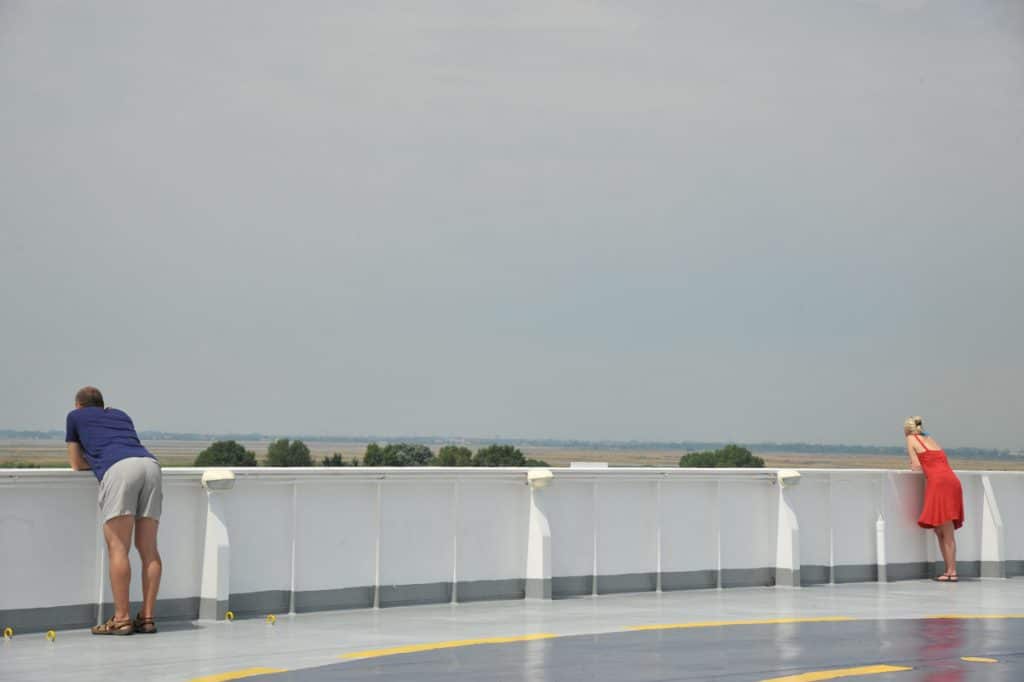 > The landscape makes its cinema, 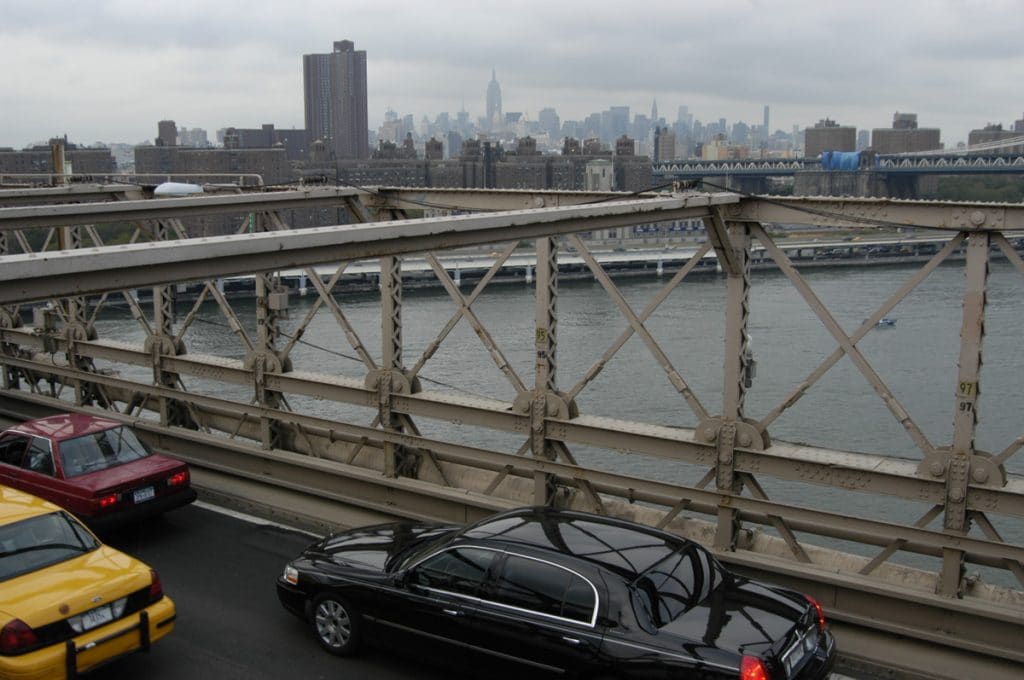 Low sordid or sumptuous panoramic neighborhoods, many landscapes have left in us a footprint that deeply structures our sensitivity and our identity. It is this paradoxical identification with a totally moving fiction that the ARFI duo “Actuel Remix” amplifies by accompanying the flow of images, punctuating it with instant soundscapes.

This exhibition brings together our perceptions and tools of figuration of the territory. The works collected in the Atlas of the movements record the landscape with scales ranging between 0 and 30 000 km / h, slow movements, almost immobile, imperceptible of the geological or climatic, our jerky social movements, our wanderings and our uncertainties, our regular or habitual movements, the movements of animated beings and the mechanics of machines that have become essential to the control of our own movements and to the knowledge of territories. 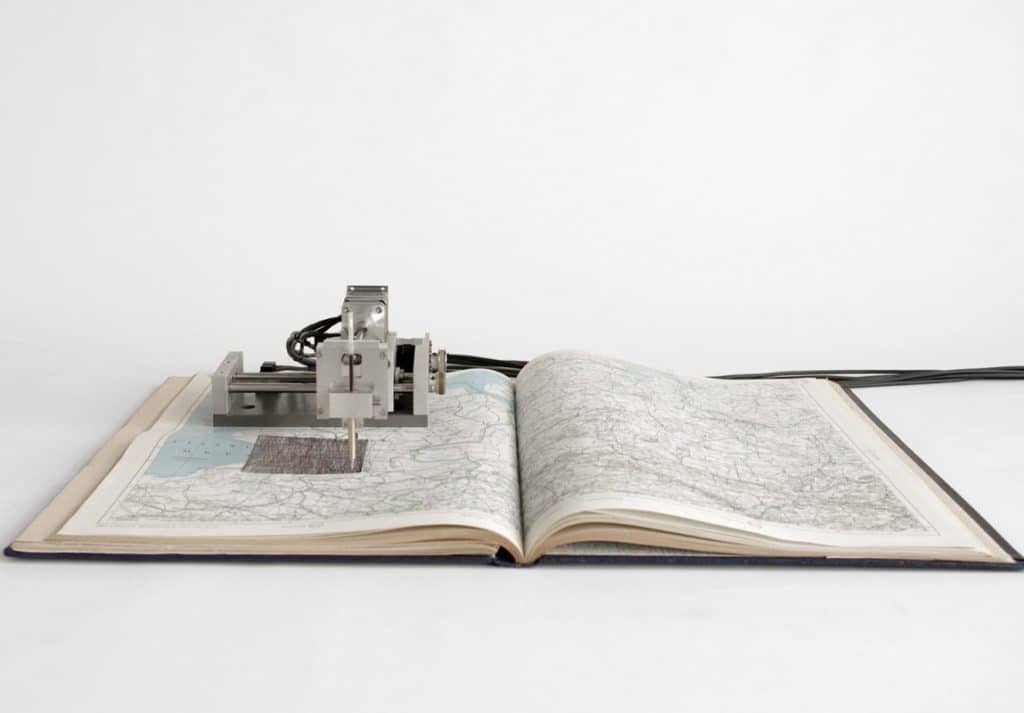 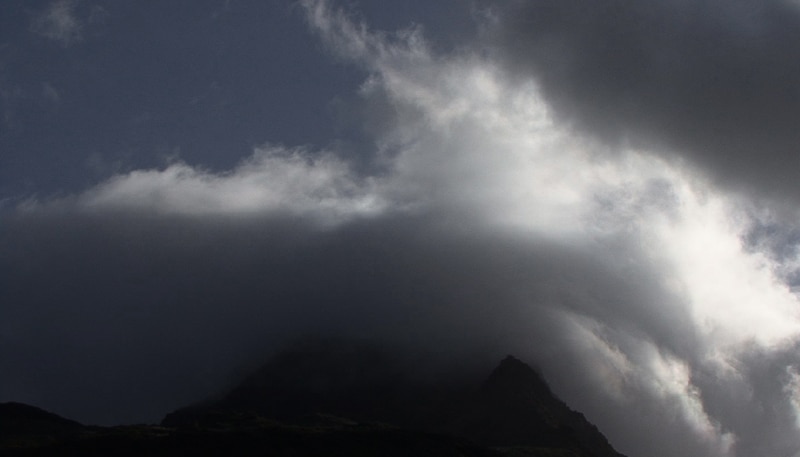 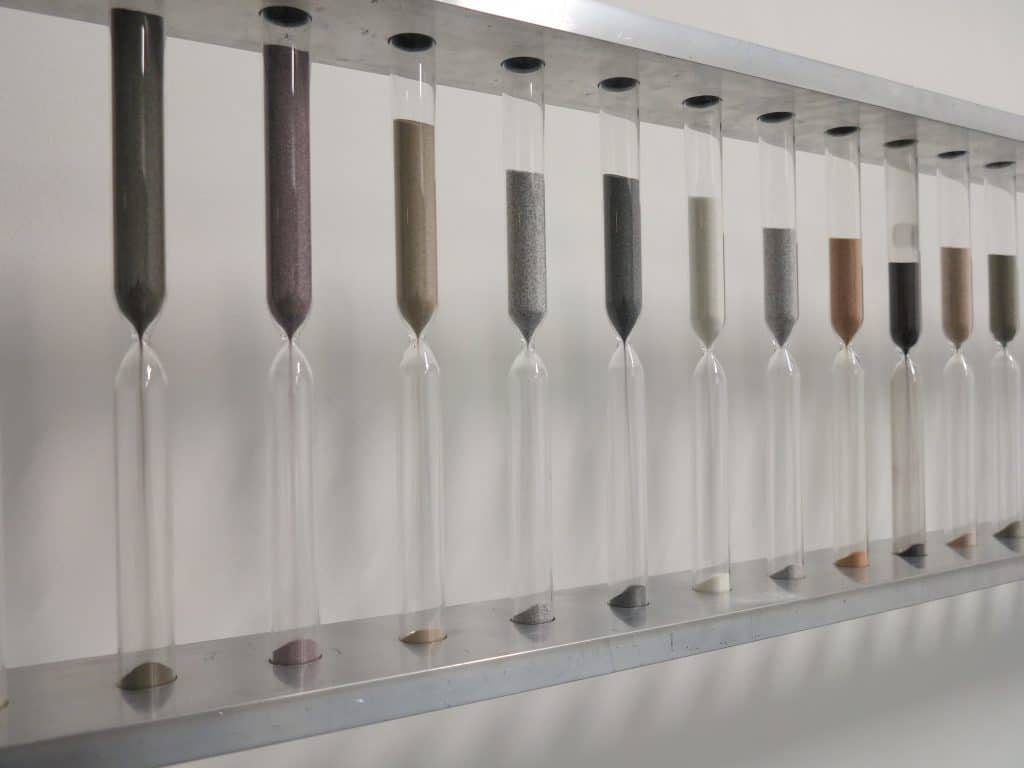 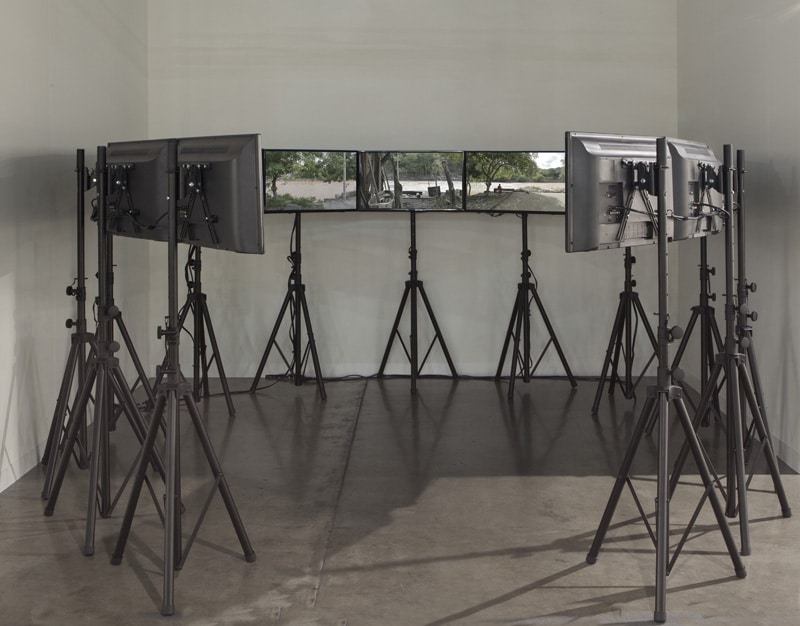 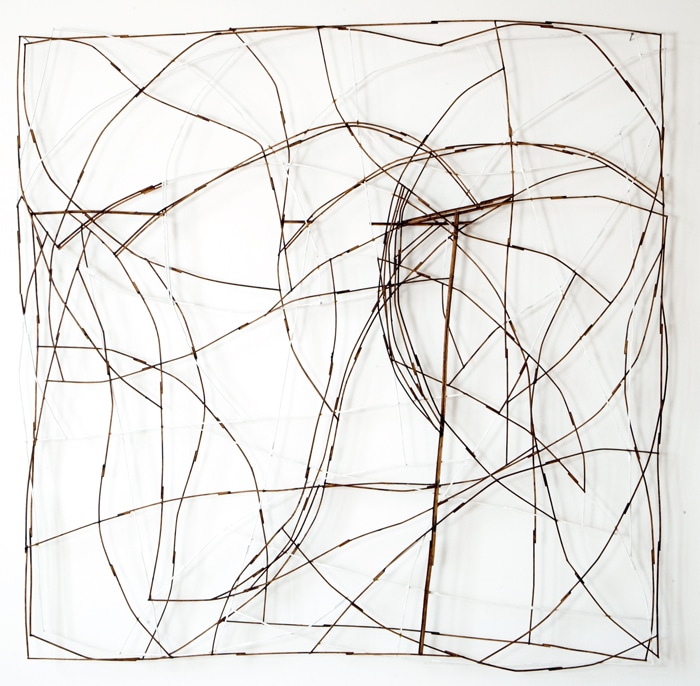 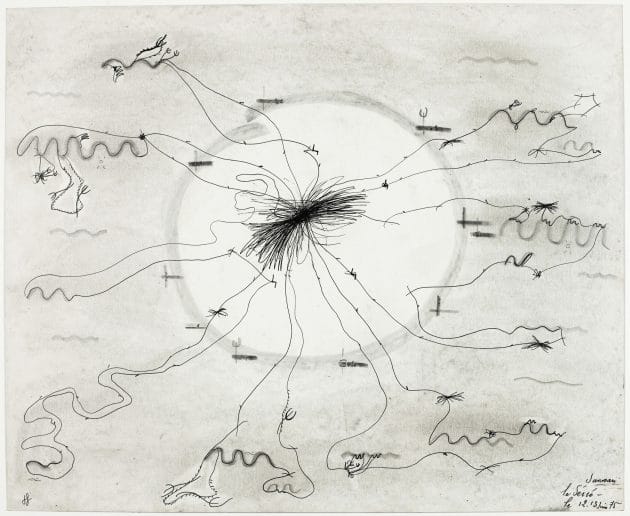 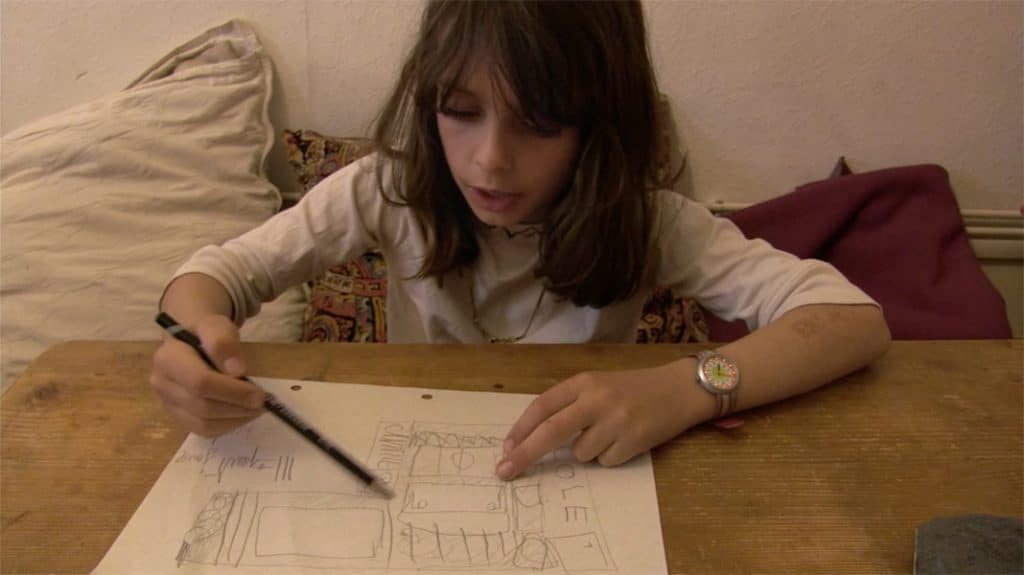 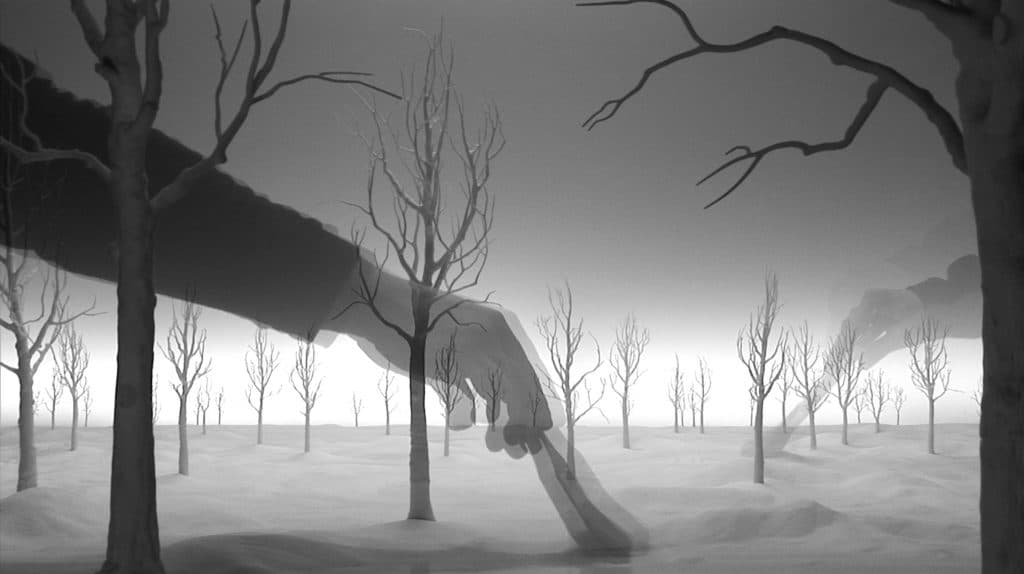 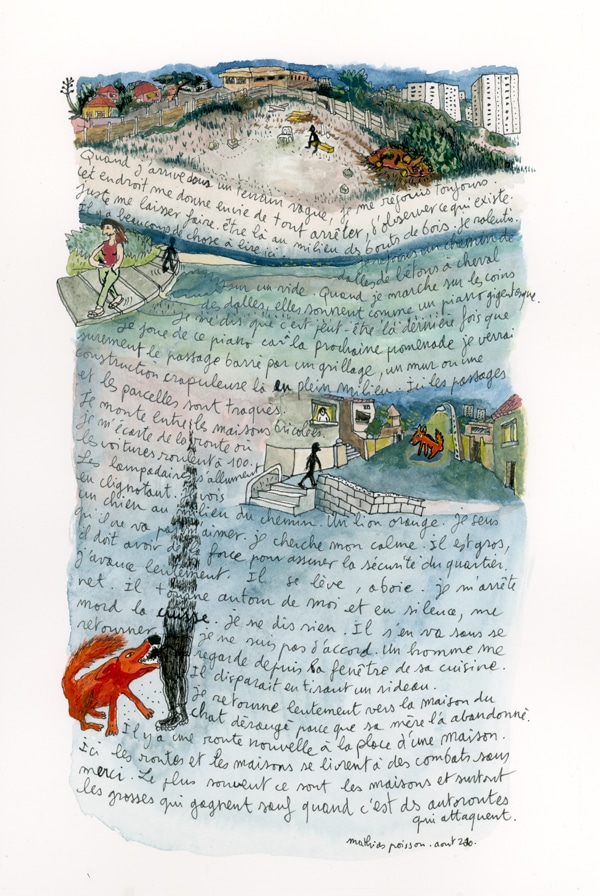 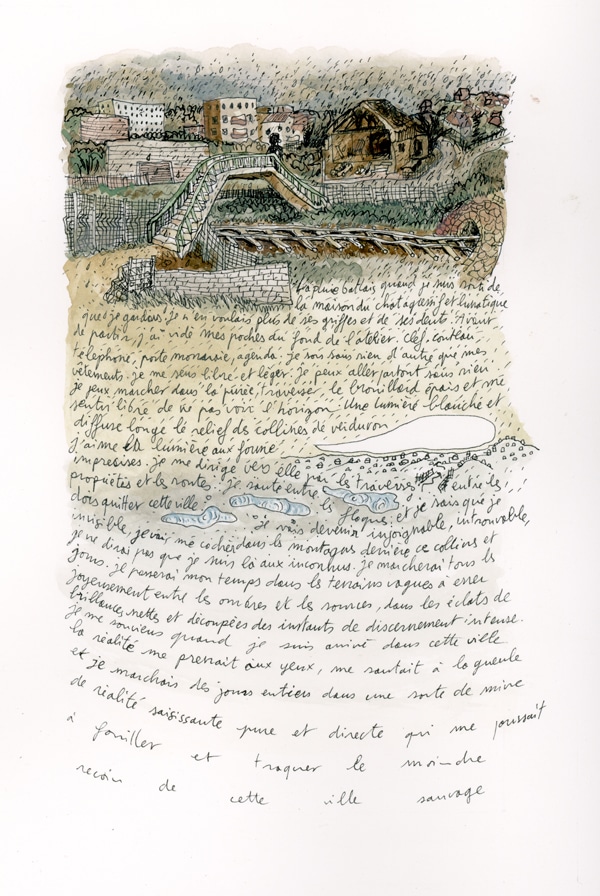 The subjective maps of Mathias Poisson are reductions of the landscape by decoction. He notes his walks on his notebooks, attentive to the slightest event but cultivating a deliberate absence of hierarchies between the information he records. Then he distills and infuses the objects and plants he meets to extract the inks from his drawings. He then composes a sensitive card, a kind of condensed place that invites him to follow suit. It presents here a series of crossings of the landscape through cities as different as Marseille, Tokyo, Naples, Algiers or Istanbul, then during a second exhibition it will make us discover the original works realized during 5 stays in Isère. 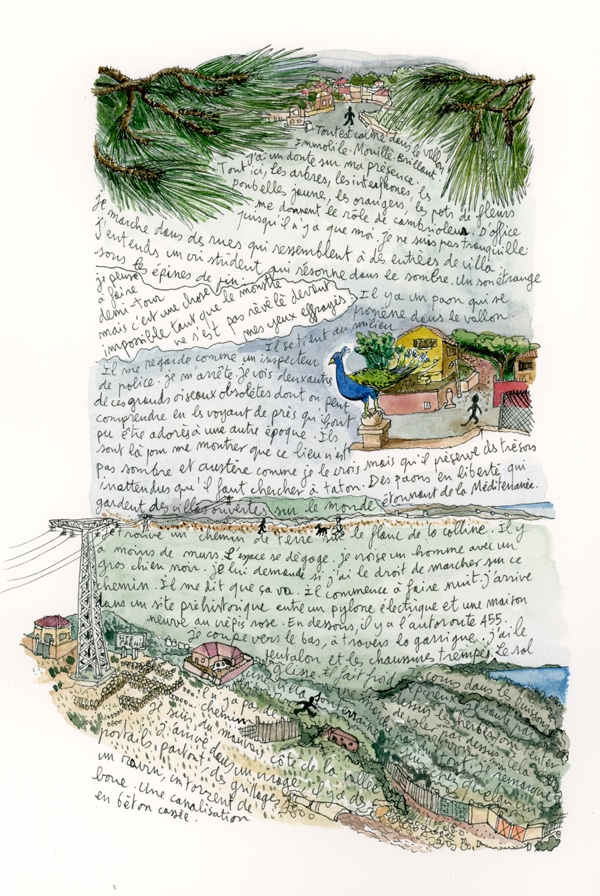 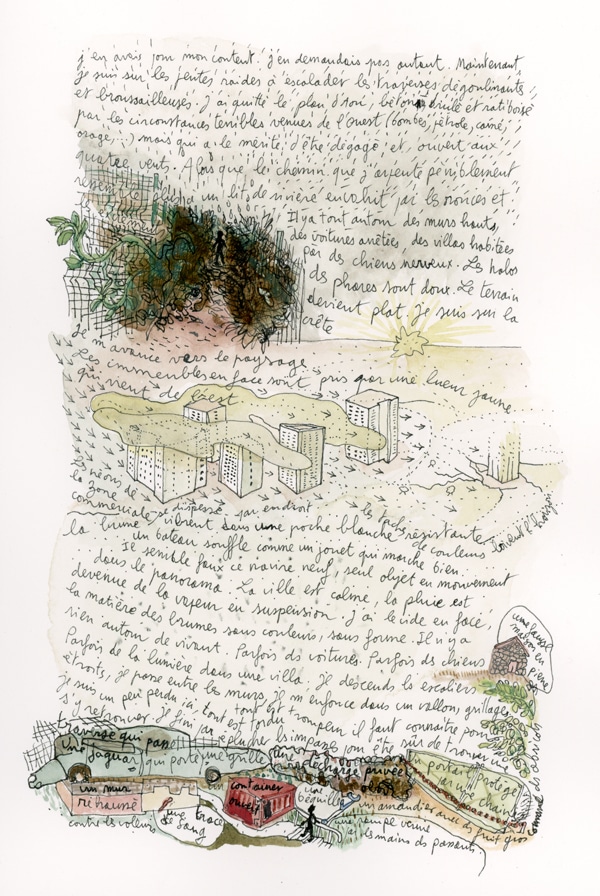 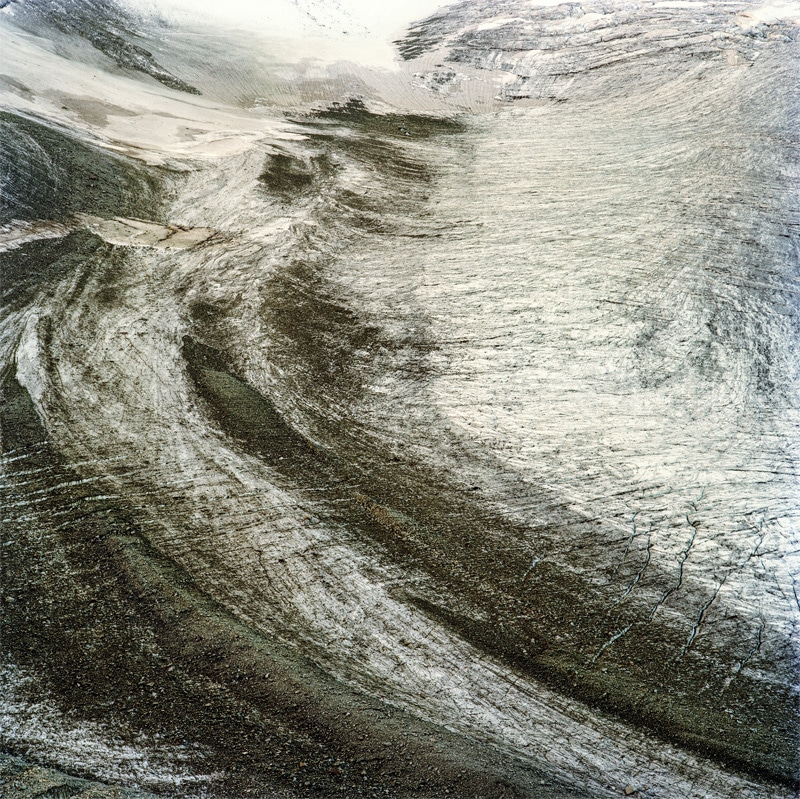 Olivier de Sépibus surveys the Alps to capture the interior movements of glaciers and rocks, faults, breaches, fractures, slow dislocations, sharp breaks and landslides. The seemingly eternal mass appears strangely fragile and tormented, and its solid presence seems to belong to a provisional stage of earthly history. Its photographs update our imaginary of the high mountain by fixing frontally the current state of alpine massifs which slowly defeated in stone desert, bringing with them the dreams of conquest and heroism of a man “master and possessor of nature”. Because, if our representations are defective, they still populate the postcard display stands. 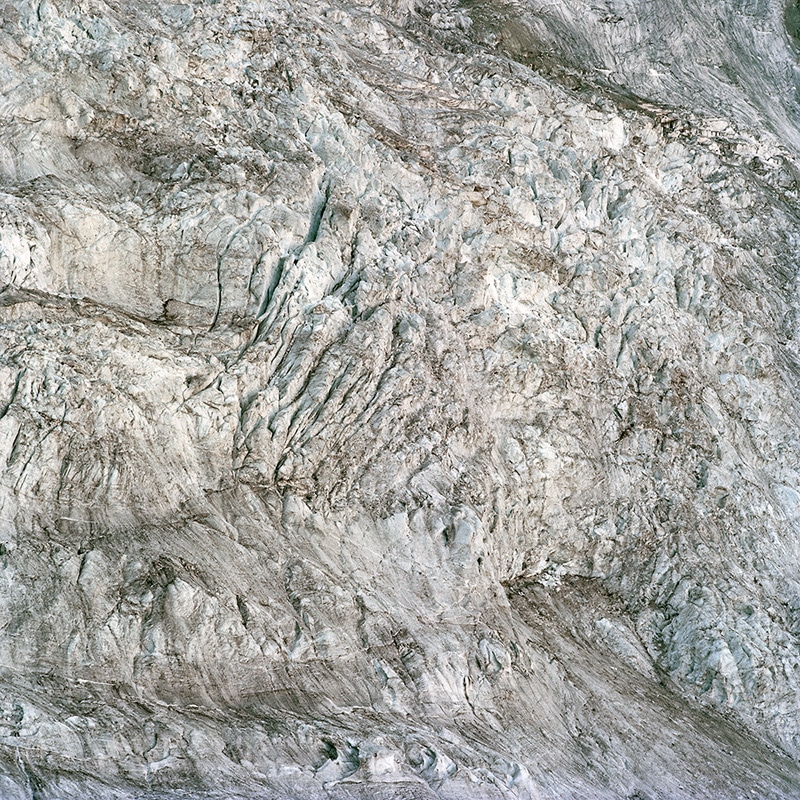 These listening landscapes take the form of a bus trip …. For passengers, behind the windows of the bus, pass the passive images of a usual journey. But in the speakers, a whole world of sounds comes to tell other stories, transform the daily landscape into a decor, upset the imagination.

This gap between listening and seeing allows us to renew readings and perceptions of our familiar landscapes. By slightly increasing the intensity of the ambient sounds or by listening to other sound situations recorded in the same space, the scene becomes “talking”, takes an unexpected relief that reveals the complex relationships between sight and hearing and, d on the other hand, between the real and the imaginary. Because amplified listening approaches a film soundtrack, giving access to the symbolic potential of places, carriers of fiction, memories and dreams.

The three bus tours of “listening landscapes” are accompanied by the researcher and composer Henry Torgue and the landscape architects of the Urban Planning and Environment Council of Isère.

During 120 minutes you are invited to visit with the company Delices DADA the ordinary places of your daily life. Comfortably seated by bus, you can slide the picture traveling through the windows.

But four stops in landscapes meticulously chosen by the company upset your perception. These freeze-outs propose to take the landscape backwards, to interpret it in a totally unknown, crazy and poetic way but so stimulating that from the return of the coach to the point of departure, one discovers the desire to taste a new peregrination …. Here are some postcards : 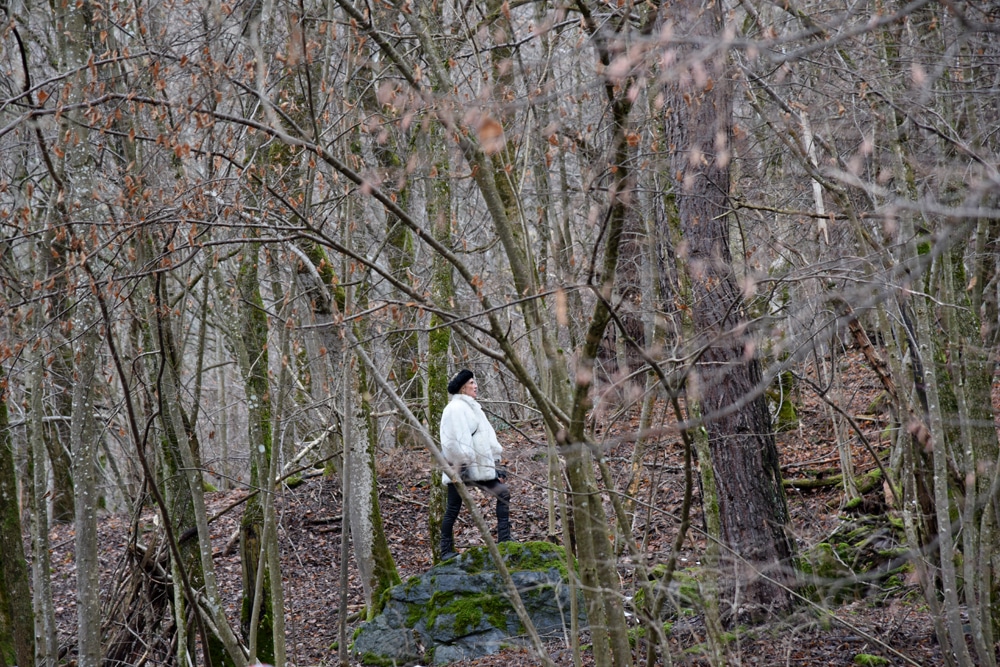 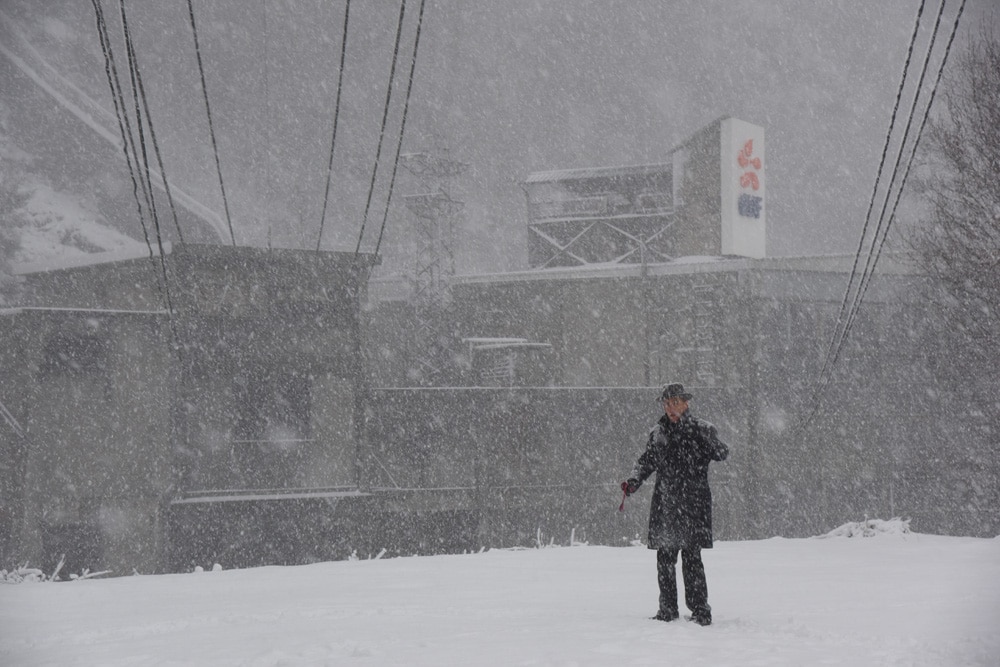 And 2 landscapes to guess while listening these sound punctuations:

For your comfort, plan for shoes and clothes adapted to winter weather conditions, water and possibly a small energetic snack! 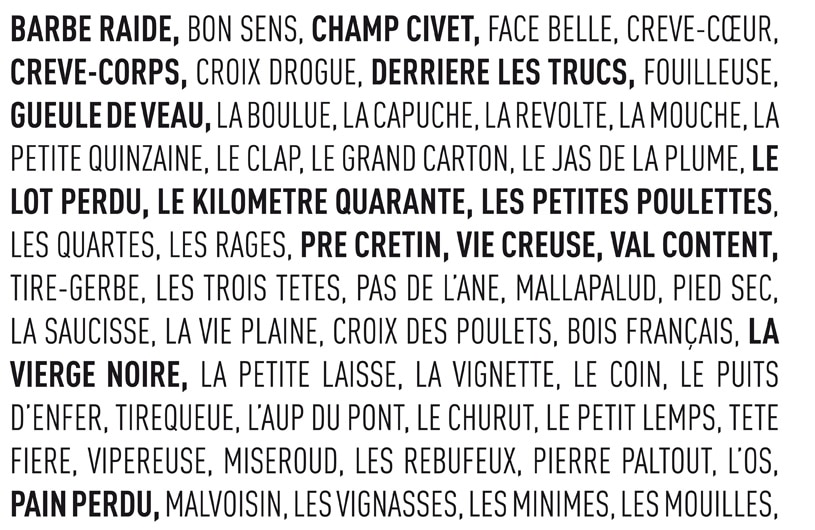 The few hundred words left on the floor of the central aisle of the Grenoble museum are a summary of the thousands of names of places that titrate – or rather subtitle, with care landscape.Ces fragments are tenacious – some words plunge their roots in a time before the Roman occupation, and were so often chewed and pronounced by new mouths that their senses today outcry but continue to be troubled and escape us: Vipéreuse, Miséroud, Mal-Pourchie, Les Écondues, Les Écorrées, Les Embouffus…  the word is there, without being there. He belongs to a language, the ghost of ours.